The Northern Utah Youth Symphony and Chamber Orchestra will present their second concert of the year Saturday, February 27, 2021 at 3:30 pm in the Mount Logan Middle School auditorium. Due to COVID-19 restrictions, seat reservations are only available through members of the orchestras. Admission is free, thanks to our sponsors.
The Northern Utah Youth Chamber Orchestra, under the direction of Maestro Nathan West, will open the concert with arrangements of Dvorak's Slavonic Dance No 8 from his opus 46, Stephen Foster's Beautiful Dreamer, and Tchaikovsky's Capriccio Italien.
The Northern Utah Youth Symphony, under the direction of Maestro Conrad Dunn, will then take the stage with some meaty classics. They will begin with Dvorak's Slavonic Dances no. 5, 6, & 7 from his opus 72, followed by Ernest Bloch's Rhapsodie from his Suite Hebraique for solo viola and orchestra, featuring Talmage Kay on viola. Then they will perform Brahms' Academic Festival Overture, and Del Borgo's Aboriginal Rituals. 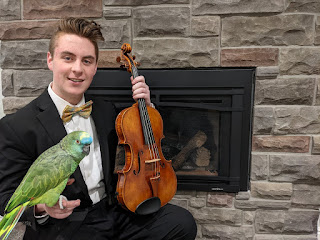 Featured Soloist:
Talmage Kay was enthralled with the violin at age two, and vowed to learn a string instrument. He reluctantly excelled on the piano beginning at age five, and was finally able to touch a violin on his 8th birthday. From 3rd to 5th grade, he played in two beginning orchestras, and took private lessons. In 6th grade, while listening to the differing musical parts, he loved the rich harmonies of the viola. Playing the viola has taught him of musical complexity and the importance of teamwork throughout the symphonic sections.

He is a senior at Green Canyon High School, and will be going to BYU-Idaho to study Computer Science and play in their ensembles.  Among his favorite composers are Tchaikovsky, Dvorak, Handel, Suk, Bloch, Vivaldi, Bach, and of course, himself. He enjoys creating music and computer programs, sometimes doing both at the same time. He has played under the direction of Conrad Dunn for 9 years, and has taken part of the Northern Utah Youth Symphony for 5 years. He has performed in two of his school musicals: Aida and The Hunchback of Notre Dame, and played in the Cache Symphony Orchestra under Mark Emile.

He would like to thank Jen Sova, his first violin teacher who happened to be a viola player; Carolyn Larson, who showed him how nice the piano harmony with the violin could be; Jayme McKenna, his current private teacher for the last 5 years who has done a great job pushing him to take opportunities given to him; Patrick Clark, his school orchestra director who puts Talmage in his place as a violist; Julie, who pretty much runs the whole symphony show and keeps his section's fingerings in check; his viola, who has been with him through many scary auditions and performances; Adam Day, his luthier of nine years; Ryan Scott, his accompanist for 4 years (since Ryan was 13) who has fixed innumerable problems in performances without anyone knowing; Paula Scott, Ryan's "Julie" (mom) and page turner; Talmage's family, who have supported him through the ups and downs of playing an instrument putting up with the early morning and late night practices; and his parrot, Cooper, who loves to sing along with the music in the house.
Sponsors:
Northern Utah Youth Symphony is a project of the Lake Bonneville Symphonic Society (a non-profit organization), which is supported by the George S and Dolores Dore Eccles Foundation, Utah Arts and Museums, the National Endowment for the Arts; as well as local sponsors: Curtis Financial and Tax Management, Inc., Dr. W Clark Andersen of Edge Orthodontics, Aaron F Gardner of Brain Train Utah, Dr LaMar Johnson of PetsFirst! Wellness Center, and Grover Wilhelmsen of Classical Strings.
--
Julie Gardner | NUYS Managing Director
www.NorthernUtahYouthSymphony.org
at 1:49 PM