The Northern Utah Youth Symphony and Chamber Orchestras will be presenting their season opener concert Saturday, December 19, 2020, at 2 pm at Ogden High School. Due to social distancing requirements, the audience size is limited. If you are interested in attending the concert, contact a member of the orchestra. Admission is free thanks to our season sponsors.
Keeping with a theme of 2020, the Chamber Orchestra, under the direction of Nathan West, will open the concert with the theme "Masked Heroes" featuring arrangements of The Incredibles, Critter Crawl, The William Tell Overture, and music from The Mask of Zorro.
The Youth Symphony under the direction of Conrad Dunn will then take the stage with A Salute to Broadway, followed by two featured concerto performers, and closing with a crowd pleaser, Star Wars Through the Years. 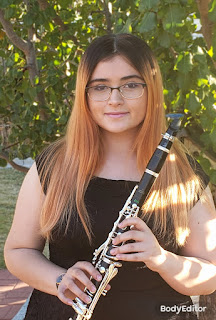 Elizabeth Archuleta will be performing the Clarinet Concerto in A by W.A. Mozart. She is a junior at Venture High School, and plays in the school band directed by Cindy Child. Cindy has been Elizabeth's teacher since she started on the clarinet in the sixth grade in the school's beginning band. Since then, music has become Elizabeth's passion and it's what she wants to pursue. She plans on taking a dual degree program in clarinet performance and music education, to be able to share music with others.
She has played in honor ensembles with Utah State University, Southern Utah University, and Weber State University.  She loves meeting people who are connected through music, who she would never have met otherwise. There is a connection we all have through music that is like no other. To be able to perform with the orchestra is such a privilege, and she sincerely thanks every member for being there to play with her.
She would like to give a special thanks to her parents for always supporting her music journey in every way they can, being there for the long drives across the state for performances and practices, and especially handling the late night practices that we know keep them awake. Also, a very special thanks to Mrs. Cindy Child, who always supported Elizabeth and provided her nearly all of her music opportunities. Without this mentor, Elizabeth knows she would never have discovered her love for music in the way that she has and she is so grateful to her teacher, for always encouraging her, believing in her, and showing her how wonderful music is. 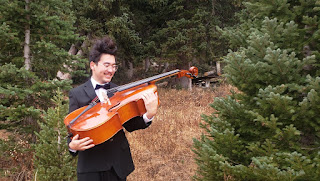 Kai Bowen will perform the Saint-Saens Cello Concerto. Nikei "Kai" Bowen has been playing cello for five years and currently studies under Daniel Pack. This will be his third year playing with NUYS.
Kai is a senior at DaVinci Academy of Science and the Arts and has been enrolled since 7th Grade. He has been section leader for the school's orchestra for four years, as well as section leader for NUYS for two years. Kai also played with Ogden Youth Symphony for three years, and was section leader for one of those three years.

Aside from youth orchestras, Kai competed at the Utah Shakespeare Festival in the Minstrel category for three years and has won third overall, as well as a specialized award for Exceptional Performance in an ensemble. Kai also competed in DASA's solo ensemble festival, along with ASTA at Weber State, where he received superior ratings. Kai also had the opportunity to be a part of the band in his school's productions of The 25th Annual Putnam County Spelling Bee and Hello Girls.

Kai enjoys the arts, both performing and visual, and plans to major in cello performance and double minor in ceramics with an emphasis on sculpture and 2D art studio.

Finally, Kai would like to thank Ian Marshall, Layy Salais, Daniel Pack, Dr. Moreno, Adam Slee, and many other teachers and mentors for motivating and pushing him to become a better musician throughout his cello experience. And most of all, he would like to thank his family for their unconditional love and support.