First of all, thank you! Your response to our request for additional financial donations has been heartwarming and very gratefully received. Your commitment to the arts in our communities is amazing!

If you are not attending rehearsal tomorrow, please fill out the form so we can keep the big holes to a minimum. I know some schools are on tour, and others on spring break, but I can't read your mind... Thanks so much!


Schedule to the end of the year


Messiah Rehearsal tomorrow. After regular rehearsal, there will a break for you to eat and refresh yourself. Bring a lunch! The rehearsal will run as long as needed to give attention to every piece - probably until 2 or maybe 2:30 pm. The pieces with more players will be first, so those players will be excused sooner.

Thank you for this loving sacrifice! You are blessing the lives of others in a truly unique way. If you are unable to rehearse tomorrow, we will be sure to catch you in Montpelier on Saturday April 13th. If you are still interested and have not signed up, let us know.

In Montpelier, the performance will be at 6 pm on April 14th, putting all the travelers on the road at about 7 pm. This is a shorter program than our Brigham City program.

4. And the Glory of the Lord

9. O Thou that Tellest

19. Then Shall the Eyes of the Blind be Opened

20. He Shall Feed His Flock

45. I Know that My Redeemer Liveth

46. Since By Man Came Death --- This one has been removed

47. Behold I Tell You a Mystery

48. The Trumpet Shall Sound 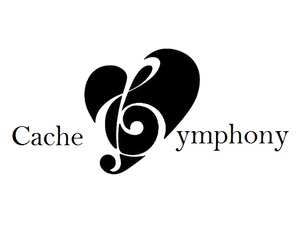 Some have asked for info to attend the Cache Symphony concert tomorrow night. There will be several familiar adults on stage. It is recommended to buy tickets online at this link. Click on Cache Symphony. Here is the info for the concert: 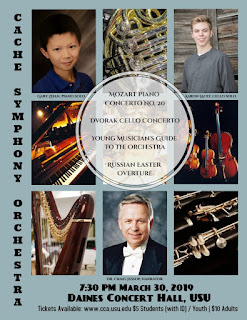 We Need Your Help!

A Note from our Board Chairman... Please Read!

Thank you for all the effort you have made to be a vital part of this organization. It's been a fun and exciting year so far; now we're on the home stretch with only the March 23rd Chamber recital in the Brigham City Tabernacle and our final concert of the year at Box Elder High School on Friday, April 26th.

Every orchestra season is unique; we work with new music, new possibilities, and new members integrating with those who have been loyal for many years, all creating a dynamic that is distinctive and enjoyable.  With 34 schools and many different backgrounds represented this year, there are new and lasting experiences and friendships forming that will enrich all of our lives. Truly.

We are seeing a disturbing trend of rising costs in several areas this year, mainly in the renting of performance venues in the area high schools.  Every summer, Julie searches for the best dates available for our performances and the projected costs entailed. We may not know the actual costs for using each auditorium, band/orchestra rooms, tech staff, common area when needed, and custodial support until after the performance. The costs vary with each school, but one fact is certain: local School Boards are raising fees, and we are prohibited from asking for donations at the concerts due to contractual terms for non-profits.

Our recent concert at Logan High was wonderful. We love performing at Logan High and hate the possibility that we might have to leave it.  However, our fee of $200 last year went up initially to $377 this year, and, due to a misunderstanding of what we needed, it increased to $735 just before the concert.  In the end, we paid a negotiated fee of $619.75. The bus rental to Abravanel Hall, originally $541, increased to $628 due to the extended afternoon session and the longer-than-expected commute home.  We know the upcoming concert at Box Elder High will be around $700.

Our Bookkeeper has created a mid-year financial assessment to determine our revenue status for the remainder of the fiscal year. We have learned we are on a trajectory to end the year up to $1500 short. We have always ended our fiscal year with a small surplus, which is then used for the start-up of the next season. There will be no money for extras this year. We are just hoping to come out with enough to start the next season!

The Board has agreed that we stop all further discretionary spending and ask for increased support coming into April's concert. This can be accomplished in several ways:

Thank you for all your driving, practicing, love of music, and recruiting of new members! We are looking forward to the upcoming performance on April 26th, featuring an "Americana" theme by both orchestras, with the 1812 Overture offered once again in an encore performance.

Chairman, Board of Directors

Quick Announcements and a link to the recording

Greetings!
1. As far as I know, we still haven't found Eliziabeth's folder. It was left momentarily under her chair on stage after the Logan High Concert and when she went back to retrieve it, it was gone. Anyone with info, perhaps people helping strike the stage, please come forward and help solve this mystery! Also, please look in the folder you have and be sure it's yours.
2. To those of you who might be wondering, yes, there is rehearsal this Saturday, 8:30 to 11:00 am! We will have new music ready for you to sightread!
3. We will also have Messiah music available this Saturday to check out. It would be really cool if a few more people could sign up, especially strings. Right now we have 1 Flute, 1 Clarinet, no oboes, 1 Horn, no trombone, 4 violins, no violas, 3 cellos, no basses. Commitment only includes March 30th for one long rehearsal, the rehearsal in Montpelier, Idaho, on April 13 and the performance in Montpelier on April 14. Host families will be arranged for participants to spend the night. Let us know if you're interested! Carpooling available!
4. You did a great job Monday! I was proud to be your Managing Director at the meeting afterwards when we had so many compliments! You are all awesome! Thanks to everyone who came for the performance, and schlepped their kids or themselves to Salt Lake that day. Thanks to the Utah Symphony for hosting the event, and thanks to Sharon Cook for keeping track of the bus riders, and thanks to Jenn Dabb for hauling cellos! You are all fabulous! Everyone's hours that day count as Volunteer Hours! Can you fill out the google form and report your volunteer hours? Thank you!
5. Here is the Abravanel Hall Recording as received from Richard Marsden. It is for archival purposes. This means you may download it and keep it, but you may not distribute it, especially the Movie Spectacular which is under copyright. Both pieces are on the same track. There are two files. One is MP3 format which is about 54 MB which is, for most, easily downloadable. The other is a lossless file, in WAV format, which is about 240 MB, but of course, the quality is better, especially if you want to play it on a larger sound system.
Have a great day! See you Saturday!
Julie
--
www.NorthernUtahYouthSymphony.org
Attendance Form
Log Your Volunteer Hours
at 2:23 PM No comments:

Greetings!
Here are a few reminders or details you may have missed:
1. Wear your formal concert attire, like for our performance last week at Logan High.
2. There will be a vehicle following the bus both directions to haul cellos. It is a white 4 Runner and all cellos should go in this vehicle. There will not be room on the bus. Do NOT put your cello in the storage under the bus. Thank you to Jenn Dabb, Tanner Chipman's mom, for this!
3. Large brass instruments (tubas) will fit under the bus in the built-in storage.
4. The bus will leave as soon as it's loaded in Perry at the Walmart. It will not wait until 10:45 unless it's still waiting for people to arrive! So arrive on time!
5. Sharon Cook will be the parent on the bus. Her number is 435-760-2645. If you are wondering where the bus is, hers is the number to call. If you call me I will tell you to call her. I will not be on the bus because i have meetings and other responsibilities.
6. If you hear a piece today that you want to play, write it down and let us know! :) Remember to be a great audience! Unless we are performing or applauding, we provide the silence!
7. Do not leave anything at Abravanel Hall! Do not take anything to the Green Room that you will not need on stage! Do not leave anything in the Green Room! Look around your area as you leave for the day and be sure you have everything you came with!
8. You are responsible to bring your folder home! We are NOT collecting music today.
9. Have FUN! We are so fortunate to have a great program to perform! Be proud of your accomplishment! You are all awesome!
See you soon!
Julie
--
www.NorthernUtahYouthSymphony.org
Attendance Form
Log Your Volunteer Hours
at 7:10 AM No comments: