We never had a volunteer to set up the end of year party, and it kind of fell off my radar. If you believe in end
​-​
of
​-​
year social get
​-​
togethers
​and would like
to plan a chance for everyone to bring a pot luck and enjoy some time at a park, do let me know. I can tell you how to make it happen
​ & ​
support your efforts.​

Depending on timing at BEHS, we may need a mini-van or similar vehicle to haul our nice timpanis and a whole bunch of music stands, possibly loading up Wednesday and not unloading until 3 pm Thursday. Our regular helper may not be able to fit her schedule to ours
​​
. If this jumps out at you as something you can help with, do let me know.

​​
Wear concert attire for this DRESS rehearsal. We have a photographer coming to take photos during rehearsal as if it's during the concert.

A
​​
group photo will also be taken on stage​ before chamber joins us.

Bring a
​​
sack dinner for the break. ​Not a lot of time so don't expect to leave and come back.​

Rehearsal will end with
​​
Sorcerer's Apprentice combined with Chamber (they will begin their rehearsal time at 5.15 pm in the band room).

​The first 4 outside players of Firsts, Seconds, and Violas, and the first 7 outside cello players will move to the back of the orchestra and the chamber students will take those places.
There will be o
ne more quick group on
​-​
stage picture ​after Sorcerer's Apprentice.

​​
Chamber then begins their rehearsal on stage at around 6.00 pm.

​​
Doors
​ for seating in the
auditorium will open after chamber is finished with their rehearsal.

​Join
the
​​
audience for the chamber orchestra portion of the program. We will block out seats for you.

Make sure you play A LOT when
​you
go on stage after chamber
​ ​
finishes performing.

We need to be well warmed up for the
​​
Tchaikovsky (GO NATALIE!).

F
irst violins, manage your stage area well, so our soloist can stand in the right place.

Warn your guests that it's a long piece and accepted traditional etiquette is to hold applause until the end. That means 4 movements without clapping. :)
I
​​
know some people won't be able to resist!

After
​ ​
the f
inal
wild applause, re-arrange yourselves for
​​
Sorcerer's Apprentice.

We will
​store the extra chairs and stands for the last number in the wings and bring them on after Dvorak.
The stage is going to be super full!

​You are all Awesome!​

Please know how grateful I am for all of you! There is no one I'd rather spend Saturday mornings with than youth who love music!

​Be sure to have FUN on Thursday. We do this because we love it, and that means we enjoy it and we don't look scared or too terribly serious on stage! ​ 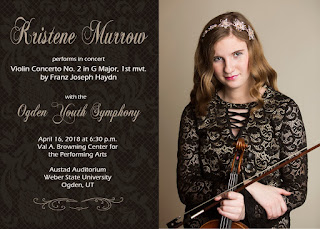 Kristene Murrow
Performs in concert
Violin Concerto No 2 in G Major, 1st mvt,
By Franz Joseph Haydn
with the
Ogden Youth Symphony
April 16, 2018, at 6:30 pm
Val A Browning Center for the Performing Arts
Austad Auditorium
Weber State University, Ogden Utah
(Julie's note: If you have never been in this auditorium, go! It's a wonderful hall!)

Greetings, All!
We will have flyers for you this Saturday to promote the concert.
Here are a few videos we recommend.
This one is Natalie playing her concerto with a piano accompanist. This will help you get more comfortable with what to expect for tempos etc.
This one is Joshua Bell playing the concerto. It's set to start at the third movement. And it's the United States National Youth Orchestra playing for The Proms, which is a series of concerts put on in the Royal Albert Hall in London. Pretty cool video!
This one is Alan Gilbert conducting the New World Symphony.
And, just to be fair, here is also Lorin Mazel conducting the New World Symphony. Both are the New York Phil, about a decade apart.
I couldn't find a video of Leonard Bernstein conducting it... plenty with just audio, but these videos are so informative! Especially the different conducting styles.
I haven't heard from Mr Dunn on what he's planning to do or not do, so just come prepared for everything and practice like crazy!
And here's a bonus video. I remember the song from my teen years. Among other things, it helps you remember how to pronounce Leonard Bernstein! Your parents might remember it! :)
Keep practicing! It's worth it! See you Saturday. 8:30 to 11:30.
Shout out: thank you to the very awesome people who come help me set up! It's generally the same group of students, and you are wonderful!
Musically yours,
Julie
--
​
www.NorthernUtahYouthSymphony.org
​
Attendance Form​
​Volunteer Collaboration Spreadsheet
Volunteer Follow-up Form​
at 6:29 PM No comments:

The Northern Utah Youth Symphony and Chamber Orchestra present their season finale concert Thursday, April 26, 2018, at 7:00 pm in the Box Elder High School Auditorium, 380 S 600 W, Brigham City. Admission is free thanks to PetsFirst! Wellness Center.
The Chamber Orchestra, under the direction of Nathan West, will open the concert with arrangements of Suppe's Light Cavalry Overture, Capua's O Sole Mio, and Saint-Saens' Bacchanale.The Youth Symphony, under the direction of Conrad Dunn, will then take the stage. They will be performing Dvorak's Symphony from the New World in its entirety, as well as the 3rd movement of the Tchaikovsky Violin Concerto, featuring student soloist Natalie Nef.The two orchestras will combine for The Sorcerer's Apprentice as a season finale.The public is invited to this enchanting evening free of charge. Families are welcome as long as they can be attentive audience members. Thank you for your support!-------------- 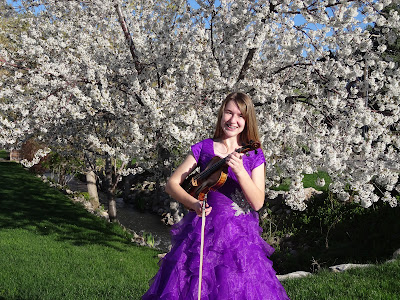 Natalie Nef
Natalie is 15 years old. She has been studying violin since she was 3 years old. She has been concert master at the school for the last three years. She received superior marks at solo and ensemble for the last 3 years and will be competing as a freshman at region 6 state solo ensemble this month. She has been in the district high school honor orchestra for 7 years, and yes her feet finally touch the ground while playing. She started when she was in third grade. She has received superior marks at ASTA competitions at Utah State. She has placed second and has won twice the Weber State University ASTA competition in the last 3 years. Natalie has also competed at federation at the University of Utah for 4 years, where she has received superior ratings and currently received a superior rating in the senior category. She was the Ogden Youth Symphony concerto winner last year, where she soloed with them and the Weber State University Symphony. She also performed with the Russian pianist, Gleb Ivano, as the winner of the Ogden Symphony Ballet Youth Benefit Concert Competition. Natalie won the Jean Poll music scholarship last year. She also has performed with the Ogden Tabernacle Messiah Symphony. Natalie has had the chance to perform with Alex Boye, Jim Brinkman, and David Osmond. She won an international music competition this March and will be performing at Carnegie Hall this June. She has been a member of the Northern Utah Youth Symphony for 4 years. She has studied under Alyza Bowcutt, Amber Taylor, and Peggy Wheelwright.Natalie has been playing the piano since she was 5 years old. She has competed in many piano competitions, including Weber State Piano Festival and Northern Utah Piano Federation, where she has received superior marks. She has also received superior marks for the last 3 years at Region Solo Ensemble. She is one of the school’s concert choir’s accompanists. She studies under the direction of Cammie Titus.Natalie has studied the pipe organ for the last 3 years, as soon as her legs could touch the pedals. She is one of the church’s accompanists. She has studied under Richard Rhees.Natalie is a member of the International Children’s Choir under the direction of Dr. Katherine Sorenson. She has been a member for 10 years. She has performed for hundreds of Ambassadors from around the world in their native tongue. She has done multiple recordings for movies, commercials, composers, and recording artists. She has been in the University of Utah’s Hansel and Gretel production. Her favorite performances are when she gets to sing and play her violin for the First Presidency and Quorum of the Twelve of the Church of Jesus Christ of Latter Day Saints. She also is in the bell choir.She is in ninth grade at Orion Junior High School. She is a 4.0 student and a member of the honor society. She is a member of the Weber High swim team, where she lettered as a freshman. She is also on a premier competition soccer team. In her spare time, when she is not practicing, she likes to travel with her family and hang out with friends. She hopes to someday solo with the Utah Symphony and study music abroad and at Julliard.