Great great great concert! Wonderful comments from many people! Thanks to everyone who helped, thanks to our sponsors, and thanks for turning in your folders. I have every folder! A wonderful miracle! I hope you've all had a wonderful holiday break.

A few notes on concert attire while I'm thinking about it: Please note that our boys wear black jackets and black bow ties. Our girls wear black nylons or trouser socks. It looked like most people got the message; however, a few didn't quite catch some of the black or bow tie details. The outfit for youth symphony is different from chamber. Please check the DI for black suit jackets! It doesn't need to be a huge expense, but it can be a big headache if you wait until the day of our next performance.

Southern Utah Tour is ON!

We have the instrumentation we need for the tour, and more info will be passed on as it becomes available!

Utah Philharmonic Orchestra Concerto Competition: Saturday, February 4, 2017; registration deadline January 21, 2017. (Tell them you need an afternoon audition time so you don't miss rehearsal!!!) The performance for winners is May 20, 2017. For information, reply to this email and I'll forward their info to you, and visit: http://www.utahphil.org/concerto.

​See you this Saturday!
Julie and Mr Dunn​
--
​
​
​T​
he website is a
​searchable ​
blog
​ where​
​a​
ll group emails are posted
​.​
www.NorthernUtahYouthSymphony.org
​
And be sure to use our ​Attendance Form​ to let us know if you are arriving late, leaving early, or missing a rehearsal.
at 5:35 PM No comments:

Concert Info for this Saturday

Greetings!
Are we excited? :)

Before you come:
What to bring:
Saturday's Schedule
Please help break down the stage, load percussion equipment, and clean up after the concert.
Concert attire has been discussed. Please be sure to remember your black bow tie, guys! Black black black. Here is the concert dress page on the website.
Warmly,
Julie
​PS: Shameless plug. The Cache Symphony also has a concert this Saturday, 7:00 pm, at the Morgan Theater on the USU campus. Mr Dunn, Valerie (our adult volunteer French horn player) and I are all in this concert. It's going to be pretty cool! Here is the info: 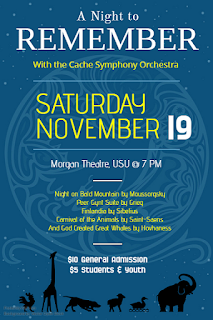 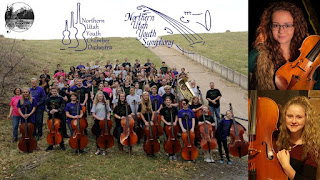 ​
--
​
​
​T​
he website is a
​searchable ​
blog
​ where​
​a​
ll group emails are posted
​.​
www.NorthernUtahYouthSymphony.org
​
And be sure to use our ​Attendance Form​ to let us know if you are arriving late, leaving early, or missing a rehearsal.
at 2:49 PM No comments:

Parents and Musicians:
The NUYS tour plans to Southern Utah look great!  We are looking for a more musicians to help us with the instrumentation and keep the transportation costs down.
Saturday, November 12th is the deadline for interested musicians to make their $50 deposit.  We need to plan instrumentation and ensure that we have a large enough group to tour.  Please bring your deposit to rehearsal!
In addition, if you are transferring your deposit from the Washington D.C. tour to the Southern Utah tour, please let us know Saturday.  We have not heard from everyone as of yet.
Finally, if you are unable to join us in Southern Utah and made a deposit on the Washington D. C. tour, please let us know specifically so we can have your deposit for you to pick up tomorrow (Saturday, November 12th).
Attached is a flyer for review and a brochure.
We hope every musician can join the tour!

Debra Francis
Tour Committee
--
​
​
​T​
he website is a
​searchable ​
blog
​ where​
​a​
ll group emails are posted
​.​
www.NorthernUtahYouthSymphony.org
​
And be sure to use our ​Attendance Form​ to let us know if you are arriving late, leaving early, or missing a rehearsal.
at 1:41 PM No comments:

Northern Utah Youth Chamber Orchestra, a strings-only training orchestra, will open the concert. Under the direction of guest conductor Amber Taylor, they will be performing Bach's Brandenburg Concerto No. 5, Dvorak's Largo, and Thanksgiving Medley.

Jaquell Taylor is a senior at Fremont High School in Plain City, Utah.  She is the daughter of Joel and Amber Taylor.  She has studied cello for 11 years with John Findlay, Paul Joines, and is currently studying with Pegsoon Whang.  Jaquell is a member of the Northern Utah Youth Symphony in Brigham City, Utah.  She is currently serving as Principal Cellist.  In 2014, Miss Taylor was selected to perform in a Concerto for two Cellos with the Northern Utah Youth Symphony.  Jaquell had the opportunity during the summer of 2016 to play with the Young Artists Chamber Players under the direction of Jack Ashton while touring Europe.  Jaquell also enjoys being a member of Hot Apple Pie Fiddlers, as well as a member of a double quartet, Aspen Strings.  She has received superior ratings at ASTA festivals for the past 10 years, and has received superior ratings at Regional and State Solo and Ensembles for the past 2 years.  She loves being involved in music and participates in various school orchestras and choirs, honor orchestras, All-State Orchestras, and teaches private lessons.  Jaquell has a passion for playing her cello and making music, whether it is fiddle, chamber, symphony, or performing solo.

Tia Luther, a senior at Ridgeline High School, started playing the violin at age 9. At first, she learned by participating in an after school orchestra program and by watching videos on YouTube. Later, she began taking lessons and currently studies as a student of Jesse Massey. Outside of NUYS, Tia plays as the concert mistress of ARCO (Advanced Ridgeline Chamber Orchestra), the first violinist in a student quartet, and in a violin and piano chamber group. Tia has participated in All-State Orchestra and received superior ratings as a soloist and chamber player at State level festivals. This summer, Tia was accepted into the Jacobs School of Music Summer String Academy at Indiana University where she took classes taught by the Verona Quartet, Pacifica Quartet, Mimi Zweig, Grigory Kalinovsky, and others. Tia also enjoys composing and arranging music. Last year, Tia teamed up with one of her friends and composed a piece for a state competition that received third place. Tia teaches beginning violin students as well and loves sharing music in any way she can. She plans to continue violin through college as a music performance major.

Lake Bonneville Symphonic Society is a 501(c)(3) non-profit organization dedicated to classical music in the Northern Utah area. The Lake Bonneville Symphonic Society is sustained by a grant from the George S. and Dolores Doré Eccles Foundation and their annual Gala Fundraiser Dinner & Silent Auction. They are also funded by individual donors, parents, grandparents, and employee gift matching from Autoliv. LBSS is also supported by Box Elder County Tourism.

In addition, this project is supported in part by the Utah Division of Arts & Museums, with funding from the State of Utah and the National Endowment for the Arts.

Tomorrow the $50 deposit is due for those interested in the NUYS Southern Utah Tour.

Final tour plans cannot be made until we are able to have the musician commitment and instrumentation support.

Please note:  Due to availability at Tuaca

If you made a deposit for the previous tour, please let us know tomorrow if you would like your deposit applied to this tour.

We hope everyone can join us!

We want everyone to come!  Join the Tour!

​
--
​
​
​T​
he website is a
​searchable ​
blog
​ where​
​a​
ll group emails are posted
​.​
www.NorthernUtahYouthSymphony.org
​
And be sure to use our ​Attendance Form​ to let us know if you are arriving late, leaving early, or missing a rehearsal.
at 4:50 PM No comments: