Greetings!
Just a quick email with the schedule, and one more plug for a few more families to sign up for dinner! Thanks for your generosity! If you haven't signed up, please go have a look. :)
Thursday Schedule, Box Elder High School, 380 S 600 W, Brigham City 84302

Thanks to PetsFirst! Wellness Center for sponsoring this concert so we may invite our families and friends to attend for Free!
Facebook Event
Event on NowPlayingUtah.com
Press Release posted on our website
If you see an article in the paper, let us know! We'd like to save a copy.
See ya Thursday!
Julie Gardner
Conrad Dunn
--
​T​
he website is a
​searchable ​
blog
​ where​
​a​
ll group emails are posted
​.​
Check it out...
www.NorthernUtahYouthSymphony.org
​Attendance Form​
at 11:02 PM No comments:

Please go to our nifty spreadsheet and sign up to help! This is better than passing around a sign up sheet since it's more likely that parents will know what they'd like to bring, and what will be feasible that day for your family.
Thanks so much.

PS. If the link above does not work, here is the lovely long copy/paste URL: https://docs.google.com/spreadsheets/d/1QEIxLZAJc652_FTNLKolO65M6IMxzXZNzauL3jmoZpc/edit?usp=sharing
​

I already contacted those who signed up as potential volunteers to help with food, but have had very little response. What I really need is a super person to take over the planning and execution of said dinner so that all our kiddos get fed between rehearsal and concert on April 28.
It's coming up! Please volunteer if you feel you can help; I really need someone to say they'll be in charge and make assignments before this Saturday!
Thanks!
Julie
--
​T​
he website is a
​searchable ​
blog
​ where​
​a​
ll group emails are posted
​.​
Check it out...
www.NorthernUtahYouthSymphony.org
​Attendance Form​
at 12:24 PM No comments:

The Utah Symphony Youth Guild recital is an annual event which features some of our very talented young musicians in performance.  The competitive auditions are adjudicated by Utah Symphony musicians.

I have attached a flyer for this season's recital which is next Monday, April 18, at 7:00 pm.  It is free and open to the public.  You might recognize a name or two on this list: David Ban performed a piano concerto with us a year or two ago, and Karen Ferry lives in Corinne. I know this is late notice. I'm sending it anyway, just for awareness, and in case you have a hankering for a field trip tonight!


Youth Guild members have spent months in dedicated practice. The March auditions selected a wonderful array of talent and repertoire for you to enjoy. Please join us for the Youth Guild Recital which is free and open to the public. 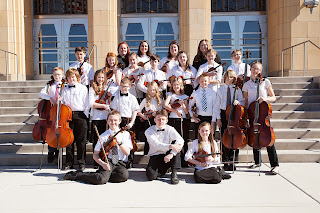 The Northern Utah Youth Chamber Orchestra will open the concert. Conducted by Amanda Kippen, this is an all-strings orchestra dedicated to preparing musicians for the rigor of full symphonic music. They will be performing Meyer's One-Bow Concerto, Balmages' Afterburn, Spata's Sea Chantey, and Firth/Phillips' Lowdown, Hoe-down.

The Northern Utah Youth Symphony will then take the stage. Conducted by Conrad Dunn, their program includes Beethoven's Prometheus Overture, and Leroy Anderson's Waltzing Cat.
Each concert this year features a member of the orchestra who is a winner from the NUYS concerto auditions.The featured soloist for this concert is Megan Brasher, Violinist, performing Barber's Violin Concerto, 1st movement.

The concert's finale will be a combined orchestra performance of Grundman's American Folk Rhapsody. 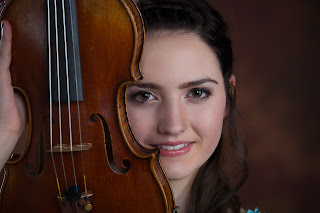 Megan Brasher is from Huntsville Utah and a senior at Weber High. She started playing the piano at age 5 and the violin at age 7. She has been performing since the age of 9 with various groups such as Pizzicato Strings and the River Bottom Band. She has participated in ASTA, Federation, Sid & Mary Folgers international music festival, Lyceum music festival and BYU Summer music festival. She has been in the Snowcrest Jr. High Orchestra and Weber High Orchestra and was the concertmistress for Honors orchestra. Megan has been a member of NUYS for three years and is currently the concertmistress. She is also a member of Lyceum Philharmonic Youth Symphony in American Fork. She has been nominated to perform at the All-Star Evening with the Utah Symphony. Megan is a straight A Student and has been offered academic and music scholarships to several schools. Megan has a passion for anything music and will often be found playing different instruments. She is currently playing the French horn in the High School band. Megan has been teaching piano and violin and is saving up for a trip to Europe this summer where she will be performing with a String chamber group in several cities throughout Europe. Megan will be attending BYU in the fall and majoring in Music Performance. In her spare time she enjoys the outdoors, playing with her animals, playing the piano, and hanging out with friends.

Rehearsal at 8 am tomorrow!

Reminders
Schedule for the next three rehearsals:

8:00 am to 11:00 am, April 9, 16, and 23.
Please be early to help set up. We need all the time we can extrapolate, and we also need to have Chamber come play American Folk Rhapsody with us at the end of each rehearsal.
Thanks!

The Dinner and Silent Auction is TOMORROW! So fun, and so important. We need all the help we can get, and one thing you can do to help is bring back unsold tickets.
Thanks!